I don’t know if it is because I started out my working life as a high school English teacher, but I seem to be in the habit of noticing words and phrases that suddenly become heavily used and sometimes misused.  I can’t be the only one who flinches each time I hear “literally” used to underscore something, even if that thing could not literally be true.  Recently a young person said to me, meaning she was really exhausted, “I’m literally dead.”  The word “unique” almost never appears as it should, unqualified, but it is often accompanied by words like “really” or “sort of.”  And speaking of “sort of,” I am now gently tortured on a regular basis because I can’t help noticing the sheer number of times the phrase appears (nonsensically most of the time) in reports on the radio.  I hesitate even to mention it in fear that you will also be unable not to notice.  I will leave it to the social scientists to figure out what using “sort of” every other sentence means about the human condition.

A word I have begun to hear a lot recently is “transformative.” Engaging in a transformative experience is, it appears, the new, new thing.  People want to go beyond entertainment, beyond travel, beyond simply learning something, and engage in an experience that is transformative.

Pine Island Camp, which has been providing transformative experiences for boys and their counselors without fanfare for well over 100 years, suddenly finds itself in the vanguard of an important and popular movement. While in 1902 there were barely any stop signs in existence, much less the information superhighway, founder Clarence Colby expressed clearly the transformation that took place when campers and staff stepped out of the hustle and bustle of the modern world and into a boat or onto a woods path:  “To give boys a healthful and beneficial summer outing, to clarify their minds and reinvigorate their bodies, to give them new life and new strength – in a word, to afford them an opportunity for re-creation, not merely recreation – is the purpose of Pine Island Camp.”  These words, written in 1904, while stylistically dated, are Pine Island’s mission statement today.  In 1911 director Dr. Eugene L. Swan wrote, “Do not, oh, do not, spend your vacation time in a hotel, or Pullman car.  It will do you more good to sleep under boughs aslant, by a mountain lake with the trout broiling, than to see the Congressional Library or Niagara Falls.  The great cry of ‘Back to Nature’ that is spreading abroad over our land is full of deep significance.”

In short, other than mosquitoes and black flies, the specific things one leaves behind when one steps onto the boat to head out to Pine Island have changed, but the fundamental benefit of the Pine Island experience has not.  Substitute “in front of a screen” for “in a hotel or Pullman car” or “play another minute of a video game” for “see the Congressional Library or Niagara Falls” and the message is exactly the same today as it was in 1911, and ironically Pine Island’s adherence to the almost magical formula established so long ago has placed us on the cutting edge of the technology revolution.  If you listen carefully and keep your eyes open, you will see that the truly new, new thing is to step away from screens, blogs, phones, Instagram, Facebook, Snapchat, and texting in order to improve our ability to concentrate, think critically, reconnect with other human beings. 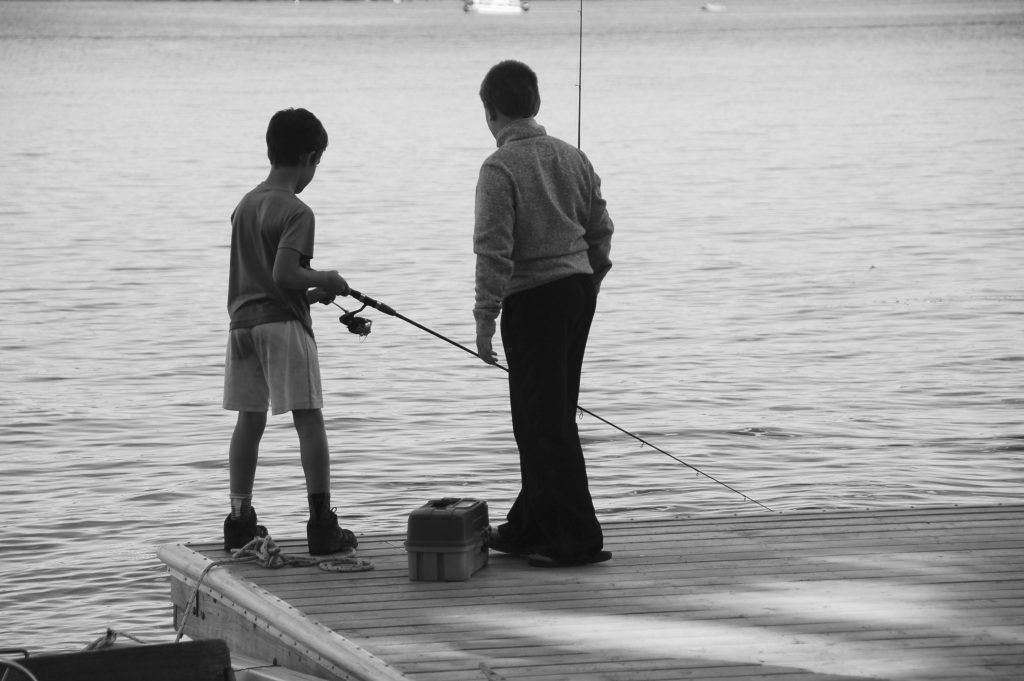 This “new” idea has been expressed in a number of new books, including The Power of Off by New York psychotherapist Nancy Colier.  She discussed the book in a January 9 interview with New York Times writer Jane E. Brody. Colier focuses particularly on the very recent profusion of the smartphone and the deleterious effects it is already having on both adults and children.  She writes, “we are spending far too much of our time doing things that don’t really matter to us.” Both in and outside her practice, she has encountered many people who have become, “disconnected from what really matters, from what makes us feel nourished and grounded as human beings…Most people now check their smartphones 150 times per day, or every six minutes, and young adults are now sending an average of 110 texts per day…46 percent of smartphone users now say that their devices are something ‘they couldn’t live without‘…Without open spaces and downtime, the nervous system never shuts down — it’s in constant fight-or-flight mode…We’re wired and tired all the time. Even computers reboot, but we’re not doing it…It’s connections to other human beings — real-life connections, not digital ones — that nourish us and make us feel like we count. Our presence, our full attention is the most important thing we can give each other. Digital communications don’t result in deeper connections, in feeling loved and supported …As for physical well-being, every hour spent on a device is likely to be an indoor, sedentary one. Screens are stealing time that children and adolescents should be spending on physical activity and sports, reading, or creating and engaging directly with other children, all of which are critical to healthy physical and social development.”  Many other books and articles echo the same sentiments, and many, including The Power of Off, actually warn of young people developing dangerous addictions to their digital devices.

Where better to engage in physical activity, read, or create and engage directly with other children than on a beautiful island where a boy will never be interrupted by a ringtone and the words, “Sorry, I have to take this,” will  never find himself trying to communicate with an adult who is texting, will never disappear into the endless, but solitary, labyrinthine paths of the on-line world?  As I speak with young parents around the world, I hear the same concern and the same hope – concern that their son spends too much time with digital devices and hope that at Pine Island he will find a respite from them that modern parents find nearly impossible to offer.

The absence of phones at Pine Island is critical, and we take seriously the responsibility of being sure that campers spend a full six weeks without ever hearing a phone ring or seeing anyone talking on the phone (except in the office on the mainland) or texting.  Counselors stash their phones in a secure area and only use them as needed, and with permission.  A few members of the administration have access to their phones for emergencies, and drivers carry them on the road.  This year trip leaders will carry satellite devices in place of phones to contact us if they need to. Throughout my travels to introduce new families to Pine Island I have become accustomed to prospective parents’ sighs of relief when I tell them that their sons will spend six weeks without screens or phones.

Maintaining the conditions for meaningful human interaction and living close to nature that Clarence Colby and Dr. Swan enjoyed is not accomplished by simply standing still.  It takes a lot of thought and imagination, and we work hard at it because we are just as convinced as Pine Island’s founders of the tremendous value such an environment has for the campers and staff lucky enough to spend their summers at Pine Island.  Record breaking enrollment numbers indicate that this new, new thing may just be catching on!

5 thoughts on “Pine Island on Cutting Edge of Technology Revolution!”