Packing day is not anyone’s favorite day at Pine Island Camp.  With a summer’s worth of excitement behind us, the overwhelming emotions of the day lead to some contentious moments.  As a procrastinating packer myself, I understand the layers of difficulty associated with packing away once-clean clothing, along with countless memories.

The end of packing day 2017: The crack administrative team was just settling into their chairs in the staff office to complete final preparations for the farewell celebration.  Just as all action from the summer seemed behind us, a silver-gray flash streaked by the staff office window, not 10 feet off the water.  Shrieks and screams followed the meteor-like objects.  Sensing peril, the administrators rushed to the Aristocracy dock, where campers told a muddled story of eagle entangled with osprey, performing a top-gun like fly-by.  “It almost hit me on the head!” a breathless Tyson Boynton stammered.  A crew of intrigued campers and counselors made for the land bridge – the sliver of exposed rocks that separates the Pine Island from the Second Island – as that was where the birds made landfall.  Another group watched from the Aristocracy dock, where one could just barely catch a glimpse of the avian drama.  A bush partially blocked our view, but the sight was intense:  we could clearly see a massive bald eagle and, underneath it, a mess of feathers, wings and claws frantically battering in every direction.  The eagle’s white head was intermittently dipping below the bush as it ripped at the osprey.  Too many thoughts flew through my head.  Do I save our osprey, in many ways our mascot?  Do I let nature take its course?  The combination of curious campers and a desperate osprey relieved me of the tough decision.  The eagle fled to a branch on the Second Island, and the osprey immediately took flight, putting as much distance as it possibly could between the much bigger bird and itself.  Alex Desjonqueres wandered back from the land bridge.  “Mon Dieu, the eagle was trying to steal the osprey’s fish,” he remarked, referring to the flying bass grasped below the osprey like the basket of a hot air balloon. 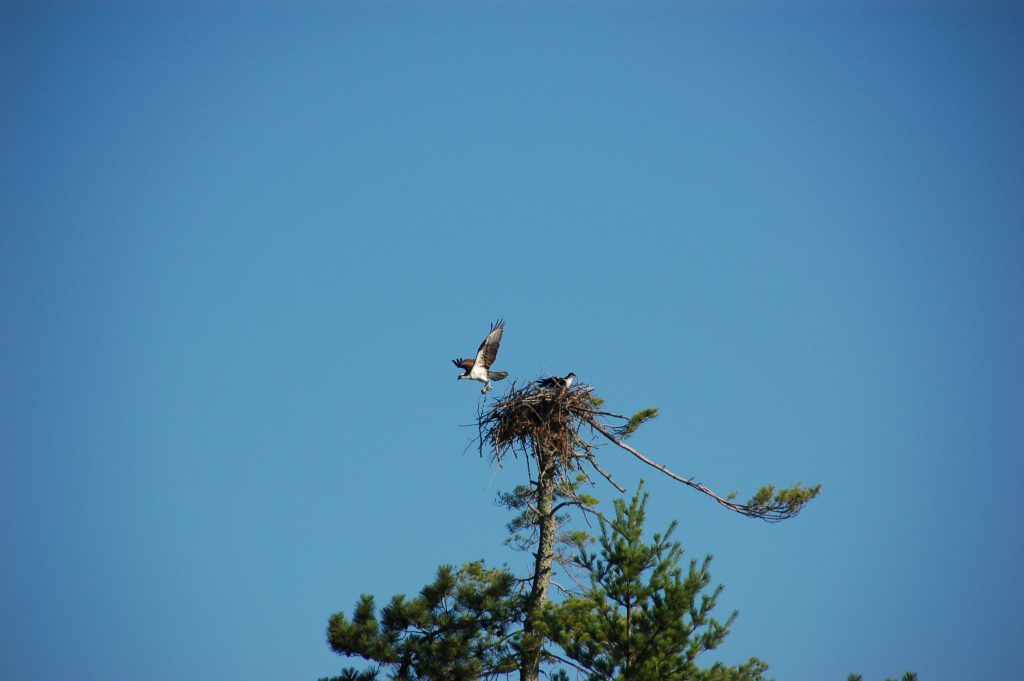 The eagle looked exhausted, and the osprey was now just a speck above the mainland.  Many returned to their previous activities.  Just as everyone relaxed, the camper-sized wings of the eagle stretched out, and there was no doubt of its intent.  The distance between the two birds seemed too far for the eagle to make up, yet its massive wings carried it quickly and soon was nearly upon the osprey again.  Upwind from Pine Island, the birds turned downwind and back towards their audience.  Rollercoaster- like movements made for a live Stellar Earth performance.  Miraculously the osprey held on to the bass throughout its journey.  One can only imagine what the bass was thinking.  The eagle made one final stab at stealing the ospreys’ catch, but the nimble osprey dove just as the eagle’s talons seemed destined to grab the bird once more.  As we marveled at the past 20 minutes of dog-fighting, I could only think to myself; maybe fly-fishing isn’t such a complicated way to catch a fish.

Further osprey drama unfolded the following day, when RAPTORR’s (Rescue All Pine Island Terminal Osprey and Return to Refuge) senior agents Cole Gibson and Satchel Toole rescued a young osprey from the West Range of Pine Island.  The LTIPS were the first to notice the stranded bird.  It had spent the morning of our final day at PIC perched high in a tree outside their tent.  With high winds throughout the morning, the fledgling bird eventually fluttered to the ground and attempted to take flight from the steep banks of the Range.  The bird couldn’t get airborn and fell into the lake and struggled to keep its head above water.  Satchel and Cole, who had executed a successful juvenile osprey rescue a couple of years ago, immediately took action.  They jumped into the water, and risking life and limb – especially fingers– collected the young bird.  Their many hours of training and past osprey rescue experience was immediately evident.  Cole’s calming presence, and Satchel’s firm yet gentle grip calmed the panic-stricken animal.  Avian Haven, the local bird rescue organization, picked up the osprey the same day.  They reported that the bird’s flight feathers were not fully formed.  They were unable to determine whether retaliation by the eagle or the high winds during the night forced the osprey from its nest.  Avian Haven said they would be able to return the bird to Great Pond when the flight feathers reached full length.  No doubt the young bird will have a score to settle with the eagle next season.