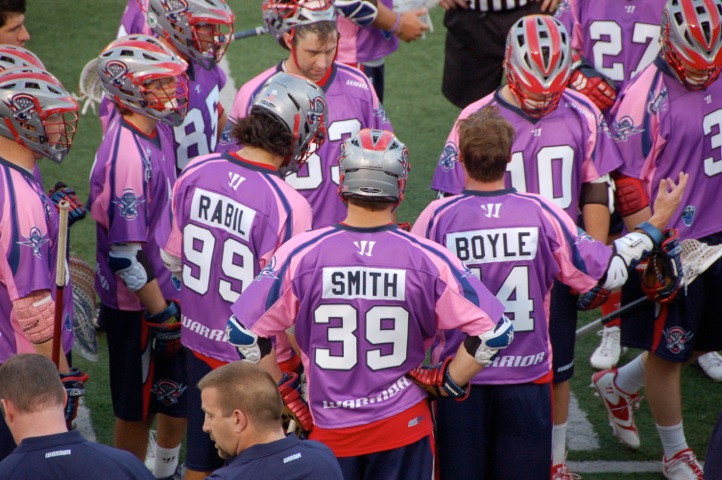 Another highlight from The Pine Needle!

Former counselor and Expedition Camp leader Kit Smith became a professional lacrosse player last spring as a member of the Boston Canons of Major League Lacrosse.  Kit’s making the team seemed improbable to him when he first considered it, but Kit and his friends and family have become accustomed to his achieving the improbable as an athlete.  Kit, an outstanding three-sport athlete at Brunswick (ME) High School, was not recruited to play in college.  He “walked on” both the powerful hockey and lacrosse teams at Bowdoin College, had stellar careers in both sports (whose seasons sometimes overlapped) and was captain of both teams his senior year.  He landed a job teaching and coaching at Hebron Academy in Hebron, ME the fall after his last stint as co-leader of Expedition Camp at Pine Island.  Then, for the first time ever, the Boston Canons had an open tryout.  Before 2012 they had only taken players who were drafted, and almost every one of them was from a well-known Division I school.  Time to walk on again.  Kit nearly didn’t go to the tryout, but his parents convinced him that he should do it just so he would not have to wonder what might have happened if he had.  Fifty athletes showed up for the tryout.  They kept three for the 40-man roster and Kit was one of them.  Next stop, training camp, where they would winnow the 40-man roster to 27.  Kit made that cut, but there was one more – only 19 players dress for a game.  A few days before opening night Kit was notified that he would dress for the game and was assigned #39, his old Bowdoin number.  A bunch of Brunswick and Pine Island folks piled into a couple of cars and headed down to Cambridge, where the Canons play, just to see what would happen.  Kit got a few shifts and even scored a goal to help the Canons to their first victory of the season.  He dressed for most of the games last season and is now in training for the 2013 season.